Confession time.  I was struggling off and on since Alan was born and up until he was about eight months old with a bit of self pity. I wasn’t exactly saying, “Why me?” to God because I truly loved Alan and didn’t want to seem ungrateful for such a wonderful little soul. But I had this running catalogue in the back of my mind of all the hard things God had brought me through in my adult life. There is really nothing I can complain about in my childhood… a statement that I should be thanking God for everyday. But I was struggling with the thought that ever since I left home God has really been chasing me with His refining fires in a way that to some might seem unusual.

We had a really hard couple of weeks back in late June/early July when Alan was eight month old.  I can’t remember all of it with clarity, but I know there were tons of appointments, scary seizures, minor injuries, one of my own, and illnesses, the worst of which was Alan’s Bronchiolitis.  Towards the end of these few weeks, I found myself doing dishes in a zombie-like state and this statement ran through my head, complete with a melody: “Oh Lord, please, I need some relief.” 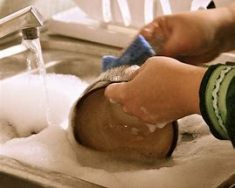 This wasn’t that unusual for me, being a songwriter at heart, but I hadn’t worked on a song in quite a while. I was prompted to go take a walk and proceeded to work out a song that was highly biographical, detailing the hardest things I’ve been through and just asking God to please send some relief to my weary soul.

God answered me by sending another really hard day, like harder than all the others. I will spare you the details, but towards the end of the day I was contemplating whether or not to take Alan to the ER. He was really out of sorts and it took over the whole day on a day when we were planning on having some special time out together as a family. Thankfully, God spared Alan of having to go to the ER at that time.  Our first ER visit came later in August at a time when I could better handle it.

Then a few days later Alan had the worst day he’s ever had with his seizures.  The neurologist instructed us to increase his seizure meds and ever since then he has been much better. It was a hard and scary couple of days and a really hard few weeks.

At the end of this series of hard weeks, I was finally relaxing and letting my mind wander while soaking in the tub.  This is one of my favorite ways to unwind, and it was here where I believe God gave me the answer I was searching for.  I still had this lingering question mark surrounding all that I had been going through since Alan was born, and piling on other hard seasons in my past of depression, recovery from a car accident, prolonged singleness, marriage struggles, and multiple miscarriages.  It all seemed like so much and I just felt like it wasn’t fair.  Then all of a sudden, again with a melody, this fell into my head:

“Don’t you focus on your pain, girl.

Almighty God is drawing near.

Why would you focus on that speck

When My Power is right here?

And every valley you have been through,

Did you forget how I paved the way out for you?

My child climb under my wings

Once again, I will cover you.”

I think it’s easy to fall into self-pity or a victim mentality when life feels overwhelming.  But this is not God’s will for us.  If we truly believe in Him, we can be confident that whatever we are facing, He has allowed it for His purposes, and He can deliver us and make good come out of it if we patiently endure.  He is all powerful and full of loving kindness.  He won’t forget about us or leave us without help or hope.

So here it is…

Lesson 2: Don’t focus on your pain, focus on His Power. He is at work and He will deliver you today just like He did yesterday. Bring your requests, even your complaints to Him and He will show you great mercy and kindness, though it may not be on your timetable. Wait for Him and trust that He will cover you with His wings and give you rest.

But I haven’t told you about the silver lining.  Yes, this was a hard few weeks for us, but in addition to the lessons God has been teaching me, here is what I really want to remember.

There was a day in the middle of that week that was pure bliss for our family.  Some of Alan’s issues prevented us from going out to an event that we had planned to attend on July 3 with some friends.  However, Alan was doing so much better the next day that we were able to go out on the 4th of July and enjoy a fireworks show in Plano up on a hilltop and everyone did terrific.  It was pure family bliss.  Dean and Henry’s wonderstruck faces during the show were priceless.  I just held a thick towel over Alan’s ears during the show and he was fine.  It was a perfect gift that was perfectly timed.

Life can seem so hard, so impossible some days.  Then all of a sudden, the clouds part and the beauty catches you completely off guard, even making the hard moments of the past seem irrelevant by comparison.  That’s where I want to focus my thoughts; on the good times, the sweetest times, the moments where His Power shines through so clear that it’s laughably obvious.  Here’s to that, friend.  Hope that’s where your thoughts are headed too, even if you have to dust off some cobwebs of self-pity, doubt or anxiety to get there.  Let’s keep pressing on together.  Even if nothing this side of heaven turns out how we hope, let’s not forget where our true hope lies.

3 Blessed be the God and Father of our Lord Jesus Christ! According to his great mercy, he has caused us to be born again to a living hope through the resurrection of Jesus Christ from the dead, 4 to an inheritance that is imperishable, undefiled, and unfading, kept in heaven for you, 5 who by God’s power are being guarded through faith for a salvation ready to be revealed in the last time. 6 In this you rejoice, though now for a little while, if necessary, you have been grieved by various trials, 7 so that the tested genuineness of your faith—more precious than gold that perishes though it is tested by fire—may be found to result in praise and glory and honor at the revelation of Jesus Christ. 8 Though you have not seen him, you love him. Though you do not now see him, you believe in him and rejoice with joy that is inexpressible and filled with glory, 9 obtaining the outcome of your faith, the salvation of your souls.

I'm a blessed wife and mom of 3 boys, one who is special needs. I love to write songs. I have a blog at alansmom.life. I have a youtube channel with my music that can be found by searching "Lisa Bender Music." View all posts by lisabender35